The Census Population Schedules contain the information about individuals collected by the Census, and are released 72 years later.

The Census Population Schedules (also called the enumeration schedules, or federal manuscript census) list the information collected by the census about individuals, including their names, occupations, etc.  It is released 72 years after each census.

Western Libraries has the available schedules for Oregon and Washington on microfilm.  They can be found in Wilson 2 East, near the very end of the Government Microform.  See the bottom of this page for part of a sample page.  Most of the 1890 Census was destroyed in a fire. The 1940 Census files, released in 2012, are available for free on the Web.

The chart indicates which microfilm  reel contains the Census Population Schedules for which counties.  Keep in mind that the names and borders of many counties have changed over the years.  A good place to look for information on changes in counties is Notes Regarding Changes in County Boundaries in the Fourteenth Census (C3.28/5: 920/ v.1, pp 145-148)   Some of the Population Schedules are available through the Census Project.

Lummi Indian Census rolls. taken by the Bureau of Indian Affairs from 1885-1912, and 1950, are available in the Center for Pacific Northwest Studies on campus.

Aggregate information from the census (how many people lived in Bellingham, how many farmers lived in Whatcom County, etc.) can be found in census books in the Government Information collection, as well as in the Historical Census Data Browser, and Census Data.

Part of a sample page 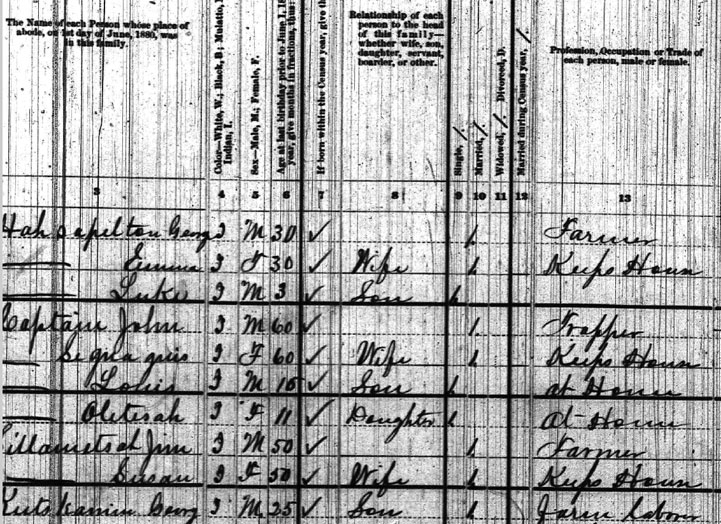 The Internet Archive and Allen County Public Library (Ft Wayne, IN) provide access to Census date from the National Archives. The data available here is not complete.