The Congressional Serial Set contains most reports to and from Congress.  It is therefore a source of hundreds of thousands of primary sources on American history and much more (for example, a report on Maya heiroglyphs).  The volumes also contain maps, photographs, and hand-colored illustrations on many topics.

Western Libraries has a few hardcover volumes, but it also has full-text access to the Serial Set from 1789 through 1969.  It is part of the ProQuest Congressional database.

An Introduction to the Serial Set

An Illustration from the Serial Set 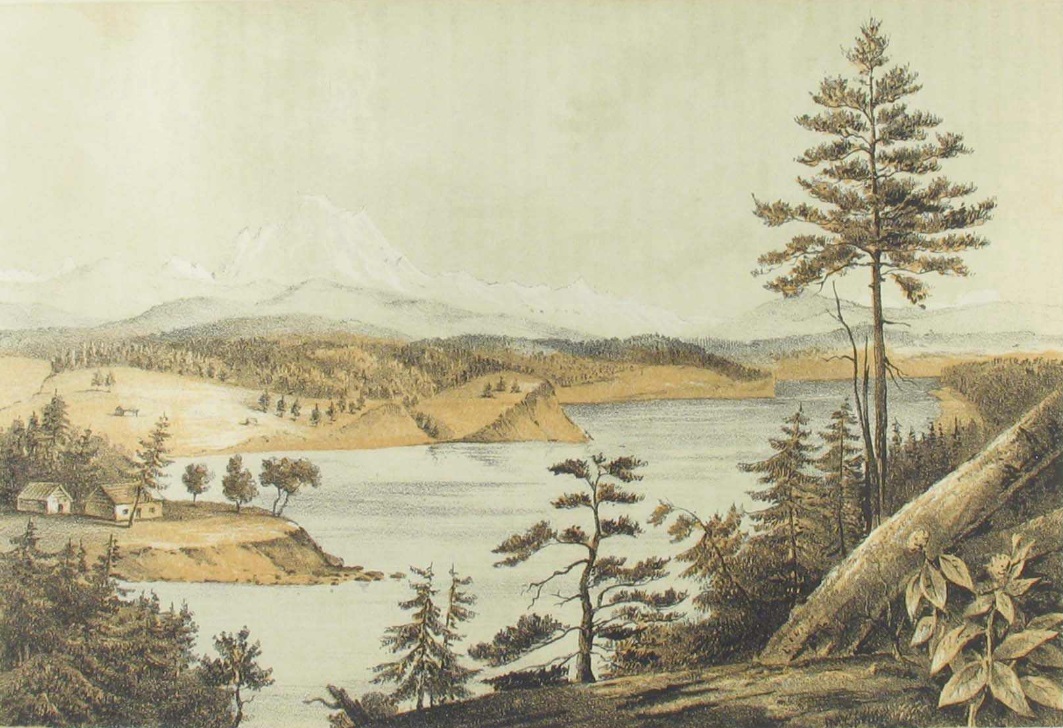 A hand-colored drawing of Mount Baker and Vicinity from Congressional Serial Set Volume 992. (1859)

The links will only work if you have already logged in as a Western student/faculty/staff member.

Lewis and Clark expedition, pt. 2: Statistical view of Indian nations in Louisiana territory and territories on its boundaries, and ethnological observation. 1806

Perry’s expedition to China Seas and Japan, 1852-1854, vol. 1:  Narrative with dozens of hand-drawn illustrations of people and places

Case of George Bush. Bush was a pioneer, the founder of Tumwater, WA.  This was a petition from the Territorial Legislature that he be allowed to own the land he was farming, even though he was a “mulatto,” i.e. Black.  This is also an example of a “private bill,” affecting only one person, and these are potential gold mines for geneaologists. 1855

Explorations and Surveys for Pacific Railroad.  The first of thirteen reports on the explorations of teams sent to survey routes that railroads could take to the Pacific.  Besides maps and drawings of flora, fauna, landscapes and Native American villages, there are reports by such noteworthy figures as Jefferson Davis, General George McClellan, and Washington Governor Isaac Stevens.

Occupation of Island of San Juan. The events leading up to the Pig War. 1860

Massacre at Fort Pillow. A Civil War battle that, according to most historians, ended with many Union soldiers, most of them Black, being killed as they surrendered.

Postal Rights of Inmates of Insane Asylums.  The author, Elizabeth Packard, was committed to an insane asylum by her husband for disagreeing with his religious views.  She escaped after six years and told her story in this petition to Congress. Bringing in the Post Office made it a federal issue that Congress could discuss. 1875

Consular reports, v. 51, May-Aug. 1896, nos. 188-191 The earliest mention in the Serial Set of “marihuana,” described as a dangerous supplement to alcoholic beverages in Mexico.

Relation of occupation and criminality of women. A book-length study, authorized by Congress, as to whether new-fangled jobs such as department store clerks, led women to lives of crime. 1910.

“Titanic” Disaster.  A rare example of a Congressional hearing in the Serial Set.  Also a source of dialog from some movies on the subject. 1912.

The Divining Rod: A History of Water-Witching. A government report on dowsing. 1917.

Atrocities and Other Conditions in Concentration Camps in Germany. 1945.

Employment of homosexuals and other sex perverts in government. 1950.